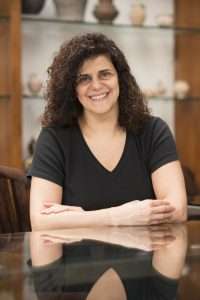 Hanan is a multi-award-winning producer. She is in post-production on her fifth feature, Polarized, shot in Manitoba in fall 2021.

Her last feature release, Despite the Falling Snow, is the recipient of 13 awards and stars Rebecca Ferguson (Mission Impossible) and Charles Dance. She is currently developing a slate of movie and series projects focused on female protagonists and filmmakers, including The Athena Protocol series alongside Village Roadshow and Gran Via Productions.

Her production companies in Canada and the U.K. are part of a movement – towards inclusion and creating non-stereotypical and authentic content about and for underserved voices.

Hanan’s first feature ‘I Can’t Think Straight’ debuted at Palm Springs Festival and won 11 awards. Her follow up movie ‘The World Unseen’ had its debut at Toronto Film Festival before going on to garner 23 awards internationally. Her 2011 feature documentary and directorial debut, The House of Tomorrow was inspired by the TEDxHolyLand conference that Hanan co-curated in Jerusalem.

Hanan is a member of BAFTA and the Canadian Media Producers Association. She was selected for the TIFF Producers Lab and has spoken on panels at conferences such as DLD Women as well as at BAFTA and the BFI.