For the last two years, on and off, our new movie, Despite the Falling Snow, has consumed my creative life. Literally hundreds of talented people here in London and in Belgrade, Serbia, have helped me make this film, not least my producer and wife, Hanan.

Hanan fine tuned my script and creative vision with me, and then organised her logistics and production team for months with military precision so that the six weeks of shooting went as smoothly as can be.

Meanwhile, my creative team looked to me for story, ideas and guidance, in order to recreate the worlds that Katya, Lauren, Sasha and Misha live in. Actors rehearsed and agonised over ideas. Costume and art designers, location managers, camera operators, grips and make up artists each perfected their own contributions to this story of love and betrayal in Cold War Moscow. 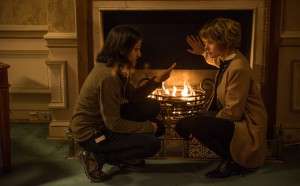 So much for the creative wonder. What was really wondrous was the small army of people that seemed to follow me around. If I dared leave my trailer to walk to set, instead of taking the waiting car, someone walked with me to make sure I made it without any mishaps (Hanan had apparently  warned them about my formidable combination of clumsiness and absent-mindedness). Also, I was never allowed to so much as think about making myself a cup of tea. No time in the director’s busy schedule. All I would have to do was ask, and whatever I wanted appeared.

This was lovely till we got back home and I kept waiting for tea to arrive, and none came. I realised that tea-making and everything else was back to normal and that while well-known actors hung on my every word on set, at home it was all I could do to make my children answer a single question at dinner.

Still, all you need is to adjust and instill new habits, something that was brought home to me this morning. A few days ago, having digested Andrew Weil’s latest book about food and health, I created a short list of vitamins that I thought Hanan needed to take. I bought them, and even presented them in their correct doses to her after breakfast in a little dish. I also added a small dish of brazil nuts (for selenium) and macadamias for I forget what, but it was something good (probably not memory).

Overall, I was a fabulous wife until this morning, when I forgot the vitamins. And the nuts. Hanan was not impressed.

‘You see? You don’t have good habits,’ she began.

I opened my mouth to defend myself. Anyone might forget a little vitamin D capsule.

‘Yes, but you have to make it a must. Consistent habits. That’s the difference between success and,’ she said, giving me a quick (and I felt, meaningful) glance, ‘failure.’

It was time to retreat to my writing cabin. What writing cabin, you may ask? Well, that’s a subject for another blog. But retreat I did, and I took my bag of macadamias with me….